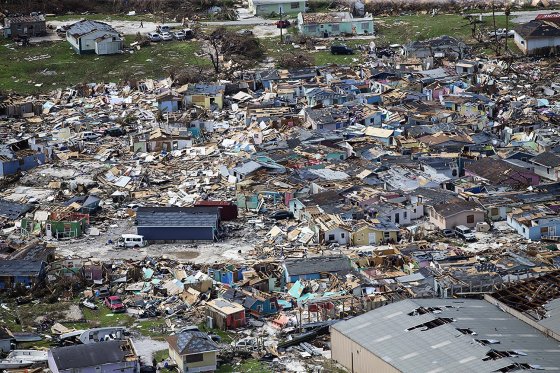 A Florida-based search and rescue team returned this week from one of the hardest-hit islands in the Bahamas, describing the devastation sustained during Hurricane Dorian as unlike anything they’ve ever seen.

Joseph Hillhouse, assistant fire chief at Gainesville Fire Rescue, was part of a six-man team that collaborated with local emergency services on urban search and rescue missions in the town of Marsh Harbour in the Abaco Islands. The team collaborated with the other U.S. search and rescue groups, local emergency operations center and the Bahamian Police, who Gainesville Fire Rescue chief Jeff Lane says provided them with their missions and logistical support.

“[They] basically said we’re going where the damage is the worst and the resources are the least. That’s how they ended up at Marsh Harbour, which was in the eye of the hurricane on Sept 1,” Lane explains.

Lane says the team is trained to deal with covering large areas, rapidly searching for survivors and extricating them from debris. Given the extent of Dorian’s impact, however, their work mostly involved helping find and identify the storm’s victims, as well as assisting with providing humanitarian aid for survivors in need of first aid, water, and direction to emergency facilities.

On Sept. 1 Dorian made landfall on the Bahamas as a category 5 hurricane, with up to 185 mph winds. The storm completely devastated the Abaco Islands and Grand Bahama. According to Prime Minister Hubert Minnis, 43 people have been confirmed dead. As of Friday however, 1,500 people are still missing.

Hillhouse tells TIME that the team helped recover 10 bodies, describing that as a relatively low number because of how bad conditions were.

“I think the amount of devastation played into [our search efforts],” he says. “There are so many structures that were destroyed, it wasn’t as simple as just going inside… some [bodies] we had to get to, we had to tunnel through debris to be able to reach them.”

Hillhouse tells TIME that certain areas in Marsh Harbour were so hard hit that there were no remaining buildings. While his team has worked on other search and rescue missions in Florida and Mexico, he says nothing compares to what they saw there. “[It] was the worst natural disaster I’ve ever seen,” Hillhouse says, placing the devastation at “somewhere in the 90th percentile.”

He believes allegedly lax building codes in the area likely contributed to the storm’s impact. According to Lane, the areas where the team focused their work included a Haitian immigrant community left basically uninhabitable following the hurricane. Grand Abaco resident Brian Symonette previously told TIME that Haitian survivors were taking refuge in the few buildings in Marsh Harbour which did weather the storm. (He added that many were fearful of leaving the island with other evacuees, worried they would face deportation.)

Hillhouse said part of what motivated the team to continue search efforts for the deceased was the appreciation shown by locals. They thanked the team for “bringing closure,” he explained, which kept them all committed amid the grim work.

The team arrived on Saturday, Sept. 7 and returned on Tuesday, Sept. 11 a few days ahead of schedule after they were warned of a new weather front moving towards the islands this weekend.

Hillhouse says that, from what he has seen, recovery will take some time. When they are able, though, he says the team is ready to return and continue providing assistance.

“I think the recovery process will be slow,” he says. “You have a lot of NGOs coming into assist, but just from an emergency management standpoint, you [will] have a very hard time with the debris removal plan because there is a lot of it. Myself and my team wishes them the best and we can’t wait to go back and help.”

“It’s an honor and privilege to be able to help in a small way,” Chief Lane said. “Were a small team helping a small area that has been really really hard hit; they’ve been able to provide critical assistance to an area that was in great need so it’s been our honor.”

New U.K. Prime Minister Boris Johnson Vows to Leave the E.U. on Oct. 31 No Matter What

24 Bodies Recovered After Heavy Rains Flood Mine in Zimbabwe

A Dozen Children Were Killed in Yemen Strikes During a Two-Day Period, the U.N. Says