Recollections of a Long Siege in Kashmir 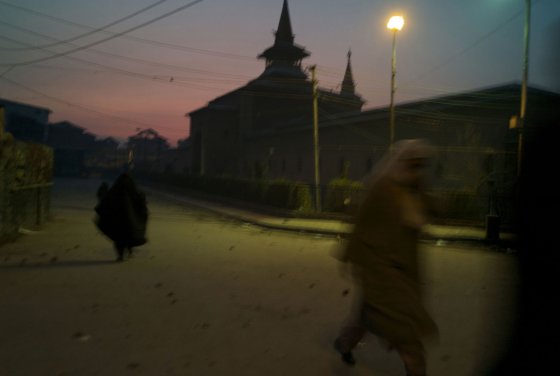 A military siege is like a chokehold on an entire people.

I was a teenager when I lived through a long curfew in Kashmir in the 1990s when the rebellion against Indian rule was at its peak. After decades of betrayals, broken promises, and pent-up resentment, Kashmiris had risen up in arms. Hundreds of thousands of ordinary Kashmiris marched through the streets in a mass eruption. India rushed in thousands of troops, turning the idyll of Kashmir into a dystopian garrison overnight. Everyone began to call the valley “a beautiful prison.”

The long war in and over Kashmir began soon after the Partition of British India in 1947. At the time, the future of the independent state of Kashmir was left undecided; in 1948, after India and Pakistan had fought their first war over Kashmir, it was agreed that a U.N.-mandated referendum would be held to allow Kashmiris a say in whether they joined India or Pakistan. That promise has yet to be honored. In 1987, a state election was rigged to prevent a new and popular Kashmiri party from gaining legislative power, leaving Kashmiris more disillusioned than ever. Pakistan readily handed Kashmiris arms and training, leading to full-blown mass uprising. The early 1990s were a time of daily bloodletting, as the Indian armed forces responded with limitless force, killing and torturing hundreds. Hundreds of protesters were killed by the paramilitaries from January to May 1990 alone.

On January 21, 1990, one day after India sent an all-powerful governor to stymie mass protests, at least 50 people were killed on the Gaw Kadal bridge in Srinagar, the main city in Kashmir. The paramilitaries surrounded unarmed demonstrators on the bridge and indiscriminately shot at them with automatic rifles. They then poked the piled-up bodies on the bridge to check if anyone was alive.

Far away in the arcadian countryside and along the Line of Control, the de-facto border that separates the disputed region into Indian- and Pakistan-administered territories, hundreds were killed in battles between the insurgents and Indian forces. Kashmir’s mountains became open burial grounds. Soon, we saw bloody internecine battles, too, as Pakistan decided to back pro-Pakistan militants to diminish those who favored an independent Kashmir. As if Kashmir hadn’t seen enough death, for some time, Kashmiris were killing one another on the streets. By day, Kashmiris were busy counting their dead, or mending their broken-bodied kin; at night, they contemplated their future.

Kashmiri Pandits, a Hindu minority who had lived together with Kashmiri Muslims for centuries, left in an almost overnight exodus. More than 200 Pandits were targeted and killed by the militants; facing mortal fear, they just left their age-old homes for the hot plains of India and became refugees. Delhi has since then used their enormous tragedy and suffering to demonize Kashmiri Muslims.

In the city where I was—Srinagar, Kashmir’s biggest city—the sight of the “coffin car” (an armored carrier deployed by the Indian armed forces in residential neighborhoods) and the olive green “gypsy” (a customized jeep used as a patrol car) would send us boys fleeing. They would sweep down a street and grab and nab. The sheer glimpse of these monster vehicles would terrify parents.

On Aug. 5 this year, when India imposed the worst-ever siege on Kashmir and unilaterally revoked the region’s long-held autonomy, I wasn’t merely reminded of all this—I simply relived everything. The soul-crushing 70-day long curfew that I experienced growing up in Kashmir never really leaves you. It follows you like a second shadow, invisible but inerasable.

In the 1990s, soldiers marched outside in chain-like formations at intervals. Our movements to see neighbors, friends, or just to walk a bit, after weeks of being restricted indoors, had to be timed to the rounds. A slight miscalculation would result in someone or the other at the receiving end of rifle butts. The soldiers could shoot you dead on mere suspicion because draconian laws that India imposed in 1990 gave the armed forces complete immunity from prosecution. The laws remain in place even today. Violence, brute power, and total freedom to exercise that power are essential tools in the hands of an occupying military. The message to the natives is clear: to break your spirit, we can do anything to your bodies.

One evening, we were playing carrom in my uncle’s house next door when we heard a commotion outside, then loud cracks, then shouting and screaming. The paramilitaries had chased a shadow in the by-lane that led to our neighbourhood from a traffic artery and pulled apart a door that they thought had helped the escapee. We held our breath.

We never found out who was beaten up, tortured, or taken away.

Food began to run out. Kashmiris, conditioned by harsh winters and a long history of political repression, are accomplished hoarders of food and memories. We hang ornate garlands of sun-dried turnip, gourd, eggplant, on our balconies and roof terraces. We keep large amounts of rice and pulses in man-size vats of copper or earthenware. We store so many medicines that each house has a mini pharmacy in the kitchen or living room. We remember years and seasons as that curfew or this. People who get married during sieges sometimes come to be called “curfew bride” or “curfew groom.” We remember. All of this to nourish the primeval seed of survival, as hard times begin to loom—and they do ever so often.

We dig into these repositories when the snows or soldiers arrive. The snows are always welcome, as they replenish our mountains and inject fresh life into our springs and gardens. The soldiers are never welcome because they inevitably kill or torture—both the young and old, men and women. They land in Kashmir for one thing and one thing alone: to deliver imperial punishments to a people who’ve never accepted India’s rule over them.

As the curfew lasted months, and days and nights began to get longer and more dreadful, boys in the neighbourhood started to hatch plans to do something about it all. A festival day was approaching perhaps, and people whispered that some households were barely managing to feed their children with sparse meals of rice and beans. People helped each other, of course, with tins and bags of rudiments but everyone knew the stores were running out. We were alright, I remember, and didn’t go without meals, but only just about.

An older boy with whom I’d often played cricket in an apple orchard nearby, let it be known that we could all go on an expedition into the picturesque Dal Lake, a ten-minute walk from my parents’ home. Srinagar, one of the oldest cities in the world, is a town crisscrossed by water. It is hemmed in by the famous Dal Lake on the east, and the great river Jhelum runs through its heart in the old town. The people of the city have always depended on its water bodies for food and transport. It is a city defined by water. Although rampant urbanisation and bureaucratic venality have eroded Kashmir’s water bodies during the last few decades, fresh vegetables and fruit are to this day sold at the shores of the lake. The produce arrives daily from an intricate network of small lake-side farms, floating gardens, and inland waterways.

And it was into these un-curfewed patches of land on water, water on land, that I went on a rickety boat nearly thirty years ago to hunt for food. Or is ‘forage’ a more appropriate term? We set off by a narrow clearing away from the main shore in our parts – there were rumours that the armed forces had acquired naval boats to patrol the lake, to lay a siege on the water, too.

The boat was slow, somewhat precariously inclined in its negotiation with the surface of the lake. I had a makeshift paddle, perhaps an old cricket bat or a plank of wood. But what I do remember clearly is that we rowed with all our strength to cover ground quickly, glances darting left and right in case an unexhausted vegetable patch came into view, in case a kind farmer spied us from his perch somewhere in the dense growths and understood at once what we wanted, needed. There was, of course, an air of thrill, adventure, on the boat but we also knew it was a rather desperate situation.

Each of us returned with something in our hands. A bottle gourd, a batch of withered greens, lotus stems, some potatoes perhaps too… The neighbourhood, like most others across Kashmir survived the curfew by sheer graft, collective action, and what came to be known as a ‘shutter economy’, which meant shopkeepers sold or loaned basic goods to people secretly, from under the shutter.

In that summer and autumn, after we’d scoured for vegetables in that wobbly Shikara boat, I quickly turned from boyhood into youth, became someone who lived amidst curfews and sieges, witnessing the image of the pastoral idyll – Kashmir – breaking to reveal the terrifying darkness of oppression.

The current siege of Kashmir, complete with an unprecedented, three-month-long communications blackout, is in many ways a continuation of the sieges that have come before. Yet this one might stay for a long time, a permanent siege in some form or the other. Because history tells us Kashmiris will not relent, even as they are, more than ever, surrounded by the jackboots of an occupation.

At Least 11 Dead in Haiti Earthquake