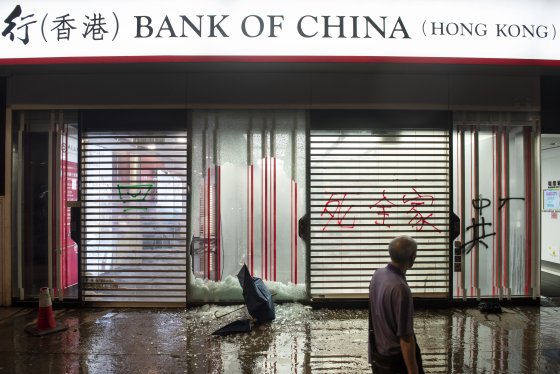 Hong Kong has entered a second day of protest against a government ban on the wearing of facial coverings—an emergency measure intended to curb months of violent unrest that has met with a disastrous reception.

On Saturday afternoon, hundreds began marching through downtown Hong Kong chanting “Fight for freedom! Stand with Hong Kong!” and “I have the right to wear a mask.” Marchers occupied major streets and most wore facial coverings in defiance of the ban, which applies to all public gatherings and renders violators liable to a year in jail.

Along Chater Road, beside the Mandarin Oriental Hotel, protesters unfurled massive banners reading “I Want Glory for Hong Kong” and “Murderous Hong Kong Police.” Protests also broke out in the northern town of Sheung Shui and in the tourist district on the Kowloon peninsula.

Thirty-one people were injured, three of them seriously, in overnight protests against the measure. An undercover police officer was attacked with petrol bombs and momentarily set alight, authorities said, adding that protesters unsuccessfully tried to snatch his gun. Local media reported that a 14-year-old boy suffered a gunshot wound to the leg.

Barring intermittent services to the airport, the entire train network remained suspended today after multiple stations, facilities, and a train were attacked by anti-government protesters. Banks, supermarkets, shopping malls and many stores remain closed after a night of destruction that saw fires lit and shopfronts smashed. Government facilities such as libraries, museums, and performance venues are also shuttered. Some Twitter users reported a run on ATMs, saying they were running out of cash.

In a taped video message broadcast Saturday afternoon in Cantonese, Hong Kong’s beleaguered top official, Carrie Lam, decried what she called “extremely horrifying violence.” She said “the radical behavior of the masked protestors was shocking. The extent of the damage was reckless and unprecedented and, quite simply, enraged everyone.”

Sounding considerably less conciliatory than she has in recent addresses, she said: “The rioters’ extremist behavior brought a very dark night upon Hong Kong, and caused society to be half paralyzed. Everybody is worried, concerned and scared. The government has the strongest determination to stop the violence.”

Lam ended her address with an appeal to the Hong Kong public “to end the violence in accordance with the law, to condemn the violence together and distance themselves from the rioters.”

The mask ban came into effect at midnight under the colonial-era Emergency Regulations Ordinance after the High Court refused to grant an injunction against it brought by two activists.

Protesters see the measure as the start of a broader crackdown and Lam has not ruled out invoking more emergency powers, describing the situation as “fluid and evolving.”

The Secretary for Justice, Teresa Cheng, refused to say if there were plans for martial law but emphasized that the government was considering all legal means at its disposal to defuse the crisis, Hong Kong’s government-funded broadcaster reported.

The ongoing political crisis was sparked by a now withdrawn extradition bill, which would have allowed the rendition of fugitives to mainland China for the first time. Opposition to the bill quickly grew into a democratic rebellion against the unrepresentative, Beijing-backed government. Many protesters are also calling for self-determination or independence for the former British possession, which was retroceded to China in 1997 after 156 years of colonial rule.

Hundreds of protesters declared the formation of a provisional government Wednesday evening, according to local media, claiming that the Hong Kong government “has lost its legality” and calling on top officials to “immediately vacate their positions.”

—With reporting by Hillary Leung / Hong

The U.S. Issues a Warning Amid Reports of Ships Being Sabotaged off the UAE Coast

Canada Has Legalized Marijuana. Here’s What That Means For American Travelers 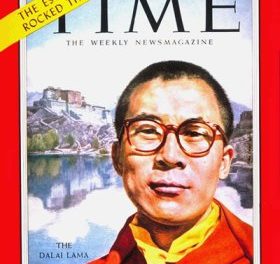