A Brief History of Protest in Post-Handover Hong Kong 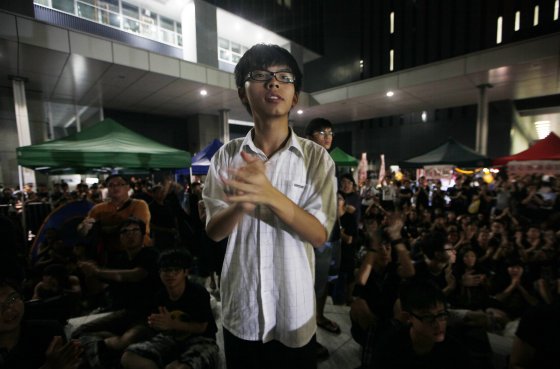 Demonstrations in Hong Kong over the past two weeks have been recognized as likely the largest in the city’s history. Sparked by a proposal to amend extradition laws to allow suspects to be transferred to mainland China for trial, two marches drew extraordinary numbers into the streets for what have mostly been peaceful demonstrations. Organizers say more than a million attended an initial march on June 9, while an estimated 2 million people—out of Hong Kong’s total population of 7 million—joined another one week later.

Critics of the proposed legislation, which the Hong Kong government suspended shortly after a protest ended violently on June 12, fear China would use it to extradite political opponents and dissidents on trumped up criminal charges. Protesters say this will erode the semi-autonomous territory’s cherished freedoms and carry signs that read: “Hong Kong Is Not China! Not Yet.”

The former British colony was returned to Chinese sovereignty in 1997, and was guaranteed 50 years of effective self-rule that would leave its way of life, and independent judiciary, unchanged. The deal does not expire until 2047, but attempts by Beijing to exert greater control over the territory in the meantime have cast doubt on the integrity of the so-called “one country, two systems” policy.

The looming deadline is particularly troubling for Hong Kong’s youth, who have grown up with liberal values, and expectations, in an international city outside of China’s Great Firewall. “Freedoms, equality before the law and judicial justice are widely shared values among Hong Kong people across generations,” Ming Sing, associate professor of social science at the Hong Kong University of Science and Technology, told TIME. “Beijing’s suppression of those values will invite persistent resistance.”

Indeed, every attempt by Beijing to draw Hong Kong closer since reunification has been met with panic and protest, often led by students. Here’s a brief look at the major flashpoints.

An attempt to introduce anti-subversion legislation drew fierce criticism from Hong Kongers worried that it would infringe on their freedoms. Commonly referred to as Article 23 after the constitutional clause requiring its introduction, the legislation prohibited treason, secession, sedition and subversion against the Chinese government, and outlawed theft of state secrets.

It is believed that more than 500,000 people turned out for a march on July 1, 2003 to oppose it. Following the protest, Michael Tien, chairman of the Liberal Party, abruptly resigned from the government’s Executive Council after his calls to delay a vote on the bill were rejected. Without enough support to pass it, the bill was shelved indefinitely.

“The huge number of protesters compelled a major government party to reverse its support for the bill,” Sing, of HKUST, told TIME. “It’s party chief was apprehensive of the subsequent political instability if the government did not withdraw it.”

2012: Protests against ‘Moral and National Education’

In 2012, authorities attempted to amend the curriculum of the Hong Kong school system to include topics on China’s history and culture and national identity, in a bid to win the hearts and minds of Hong Kong’s younger generations.

Students, parents and teachers across the city rejected the idea. “It was seen as brainwashing of Hong Kong’s youth,” Antony Dapiran, a Hong Kong-based lawyer and the author of a book about the history of protests in the city, told TIME.

Tens of thousands of people attended a protest against the curriculum changes on July 29, 2012.

A group of secondary school students, led by then 15-year-old Joshua Wong, who became an important figure in later protests, formed a group called Scholarism to fight the proposal.

In late August 2012, Scholarism began an occupation around Hong Kong’s government complex. On Sept. 8, 2012, then Chief Executive C.Y. Leung announced that he would give schools discretion on whether to implement the curriculum, rendering it effectively dead.

2014: The Umbrella Revolution for universal suffrage

The 2014 Umbrella Movement was sparked by demands for reform of Hong Kong’s electoral system. Proposals to grant universal suffrage in elections for the city’s leader, but to only allow voters to select from a list of candidates vetted by Beijing, were rejected by protesters, who took to the streets calling for genuine democracy.

The protests gained momentum after clashes between police and mostly young demonstrators who tried to reclaim a public square that was closed off after the 2012 protests against national education. Student protesters occupied the streets around government buildings and office towers in the financial center, choking traffic and rendering major thoroughfares impassable. Occupations also popped up in Causeway Bay—an area popular with tourists and shoppers—and Mong Kok, a blue collar district on the Kowloon peninsula.

The movement got its name from the umbrellas protesters used as shields against police pepper spray. Student-leader Joshua Wong, then 17 years old, became the face of the movement, and was later jailed for his involvement.

Read More: I’m in Prison Because I Fought For My City’s Freedom. Hong Kong’s Extradition Law Would be a Victory for Authoritarianism Everywhere

The occupiers gained international attention for their politeness. They handed out free food and water to fellow demonstrators, and set up makeshift studying and recycling stations. But they couldn’t quite agree on how to define their demands for democracy. “The reason that the Umbrella Movement is so complicated is that no one could agree what the alternative was,” Dapiran said. “They all had different ideas about what that meant.”

The occupation ended without any concessions from Beijing. Protest-weary students started trickling home, and public opinion slowly turned against the occupation, which caused huge traffic jams and hit the pockets of shop owners whose business was disrupted.

After 79 days, police forcibly removed the remaining demonstrators, who left banners hanging from bridges and signs scattered around their campsites promising “We’ll be back.”

2016: The ‘Fishball Riots’ against a crackdown on street vendors

Named after a popular street snack in Hong Kong, the so-called Fishball Riots were sparked by a government attempt to crack down on unlicensed food vendors in the city’s Mong Kok district. Violence erupted on Feb. 8, 2016, after some 300 people took to the streets and clashed with police., who fired warning shots—an almost unheard of occurrence at Hong Kong protests.

Food hawkers were infuriated when officials tried to shutter their stalls on health and hygiene grounds. But this was not just a fight over food regulations. To many Hongkongers, the fishball hawkers were as emblematic of the city as hotdog vendors are of New York, and the crackdown was seen as an attack on Hong Kong’s way of life. Activists began to rally round the hawkers.

Two student activists involved in the demonstrations announced last month they had been granted asylum in Germany. They are believed to be the first political activists from the city to be granted protection by a foreign country, dealing a blow to Hong Kong’s international reputation.

2016: A rally for Hong Kong independence

Thousands of people attended a demonstration outside the city’s government’s headquarters calling for Hong Kong’s complete independence from the mainland in August 2016. It was the first pro-independence protest in the city’s history.

Independence groups began popping up following the 2014 Umbrella Revolution, and the 2016 rally, including the now-banned Hong Kong National Party. People from all walks of life attended the event, which was largely peaceful.

The rally was initiated when the electoral commission banned six pro-independence candidates from running in elections for the city’s legislature. Among those barred was Edward Leung of the Hong Kong Indigenous Party, who was recently sentenced to six years in prison for his role in the Fishball Riots.

The Hong Kong government has intensified its clamp down on independence campaigns in recent years. In September 2018, they declared the Hong Kong National Party an illegal society. In 2018, a foreign journalist was expelled from the city after hosting a talk with one of the group’s co-founders.

Hong Kong is the only place on Chinese soil that hosts an annual ceremony to commemorate the Tiananmen Square massacre, when Chinese tanks rolled into central Beijing to crush a weeks-long student led protest calling for political change. An unknown number of people, believed to be in the hundreds if not thousands, died in the crackdown on June 4, 1989.

While the tragedy has been observed in Hong Kong every year since the first anniversary in 1990, the commemorations ballooned in scale after the 2003 movement against pro-China national security legislation. Each year since then has seen massive attendance at candlelight vigils in the city’s Victoria Park.

This year’s vigil drew record-breaking crowds; organizers say 180,000 people turned out. On the mainland, officials have not acknowledged the event and Chinese censors have wiped out mentions of it online.

Hiroshima Marks the 74th Anniversary of the Atomic Bombing